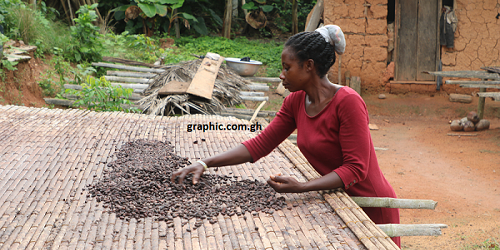 Cocoa farmers across the country who have not been paid by their Local Buying Companies (LBCs) for their cocoa beans are expected to from today Monday start getting paid.

The Minister-designate for Food and Agriculture, Dr Owusu Afriyie Akoto, who disclosed this on Friday said the Bank of Ghana had collaborated with the Ghana Cocoa Board to raise funds to settle the LBCs for onward payment to the affected farmers.

“From Monday, farmers will start getting paid,” Dr Akoto told the 26-member Appointments Committee in Accra.

The assurance follows a concern raised on the floor of Parliament by MP for Buem, Kofi Adams, who in a statement said LBCs in his constituency owe cocoa farmers to the tune of GH¢11 million.

But, Dr Akoto explained that the payment delayed because of a drop in chocolate production across Europe and America occasioned by the dreaded coronavirus pandemic.

As a result, he said Ghana was unable to export enough cocoa to activate the release of the US$190 million, the last tranche of the US$1.3 billion cocoa syndication loan secured from a consortium of banks last year.

“By now before the end of the year, normally we should have had enough contracts for the release of the whole amount $1.3 billion, unfortunately we could not sell that fast.

“So now that we have the contracts sold, we are expecting that coming week early next week the last tranche $190 million will be with us and then we can pay for all the outstanding debts and that issue will be behind us.”

Touching on other areas, Dr Akoto said Ghana had enough food to feed its people because supply in the country had grown significantly under his watch as Agric Minister as manifested in various markets across the country.

“It’s so obvious. If you go to our markets, even in the midst of our dry season, from the North, to the East, to the West, you’ll see along the high roads and even the minor roads, a lot of food being sold,” he said, and added that

not only was food in abundance but at a cheaper price, he added.

But for drought in the southern part of the country, Dr Akoto said Ghana’s 3.1 million metric tonnes projection for the 2020 farming season would have been achieved stating that 1.9 was recorded for the year.

“I’m very confident and there are a lot of people who will bear witness to the fact that supply of food in Ghana has improved considerably under my watch,” he said.

Asked what he wanted to leave as his legacy at the Agric Ministry, Dr Akoto said “I want to leave the planting for food and jobs programme as my legacy for Ghanaians.”

On the 2.2 million jobs earlier reported to have been created by the programme, Dr Akoto said they were projections as there was no market survey conducted to establish same.