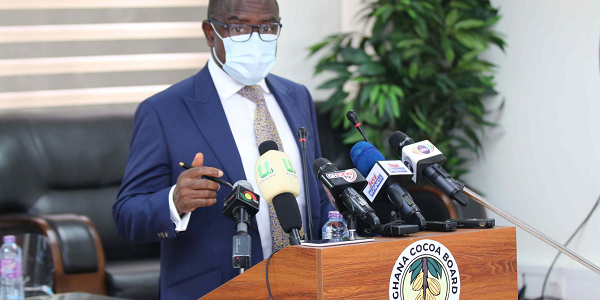 The Ghana Cocoa Board (COCOBOD) will, by the end of this year, introduce digital scales in the weighing of cocoa beans as part of measures to ensure standardisation in the local cocoa industry.

The move is also to curtail the perception that purchasing clerks adjusted scales to short-change cocoa farmers.

The Deputy Chief Executive of COCOBOD, Dr Emmanuel A. Opoku, who made this known, said already the board had purchased a number of digital scales which were being tested by the Ghana Standards Authority (GSA) before they were deployed into the field.

He was speaking at the 25th anniversary of Federated Commodities Limited (FEDCO), a licensed cocoa buying company (LBC), in Kumasi last Friday.

Aside from the introduction of the digital scales, he said, COCOBOD was also introducing the cocoa card through the cocoa management system.

Under the system, all cocoa farmers in the country would be registered and issued with cards that would enable them to sell their cocoa beans in the country.

The introduction of the cards was also to eliminate cocoa theft, he explained.

Furthermore, Dr Opoku said the card would help COCOBOD trace the beans to the farms to ascertain their source.

Currently, he said, registration for the cards was ongoing in the Ashanti Region.

According to him, in the near future, it would be impossible for any cocoa farmer without the card to sell his or her beans, and “any purchasing clerk or LBC that buys cocoa without a card will forfeit the beans to the state”.

In her welcome address, the Managing Director of FEDCO, Hajia Maria Adamu Zibo, said from its humble beginnings in 1996, the company had been able to distinguish itself as one the best performing LBCs in the country.

Currently, she said, it was ranked fifth among the 60 registered LBCs in the country, which included several multinational companies.

She said since its inception, “FEDCO has purchased over 18 million bags of cocoa, representing about 1.13 million metric tonnes, and still counting”.

Hajia Zibo said as part of its corporate social responsibility (CSR), the company, together with its partners, had undertaken numerous projects across various districts that had benefited thousands of farmers and households.

Some of the projects included the construction of classroom blocks for seven junior high and primary schools, with computer laboratories and libraries, in communities in the Western Region, 94 boreholes and toilet facilities and a community centre.

In addition, the company had organised training and capacity-building programmes for members of cocoa communities, she added.

As part of the anniversary celebration, 170 individuals received prizes, ranging from rice cookers to tricycles.

The awardees included 19 district managers, 55 purchasing clerks, 53 farmers, 39 drivers and other categories of its staff.

The Omanhene of Kenyasi No 1, Nana Osei Kofi Abiri, who represented the Asantehene, advised cocoa farmers not to abandon the crop for other crops.

He said he had observed that some cocoa farmers had started cutting down their cocoa trees for the planting of cashew and appealed to them not to abandon cocoa for other crops.

Nana Abiri said cocoa had been the bedrock of the nation’s economy and as such farmers should continue to cultivate the crop.